I feel it coming.
The same way I can smell the rain before the storm and sense when someone is sneaking chocolate chips from the pantry after bedtime, I can see this coming.
There's this growing disgust and impatience with all things gluten-free.
Rather, with the people who claim to be "on a gluten-free diet".

First of all...I've been gluten-free since before it was cool. (where's THAT t-shirt?!) It was circa 2005 when I began struggling pretty seriously with some depression. I was deeeeep into my funk of 40,000 years when my mom (probably tired of getting sobbing phone calls from 8 hours away) insisted that I come see her doctor. Her doctor did his full exam, some scans and we talked a lot, then he handed me a copy of "The Specific Carbohydrate Diet" and said "read this. This is your new life."


They say there are 7 stages of grief.

Within the first 2 weeks I had spent most of my days waffling around between the 6 less-productive stages while bemoaning the lack of anything yummy in my (stupid, horrible, torturous) diet. Somewhere around the end of week 2, I hit my stride and decided to suck it up and be a big kid and just do the thing for the (whole stupid) 6 months. I immediately dropped 20lbs, felt better, had more energy, and realized how sick I had been for who knows how long.

After 6-8 months on the super restrictive portion of the SCDiet, I began slooooowly reintroducing some foods into my diet. It was immediately/violently/horrifically obvious that gluten was NOT my friend. Think sudden onset of food poisoning while having the flu with a side of severe hangover and you've pretty much got it. Therefore, no gluten.

What is gluten, you ask? Gluten is a protein found in wheat, barley, rye, spelt and triticale. It gives breads their stretchiness and allows for sweet little air pockets to form when the yeast eats the sugars in your breads and makes them rise and get all puffy and lovely. It hides in plain sight in mysterious ingredients like "modified food starch" and "malt flavoring". It is present in all forms of wheat - white bread, whole wheat bread, honey whatever brown colored bread, and sadly, biscuits with chocolate gravy. *sob*

What happened within the past two years is that several books were written which prescribed a gluten-free diet for any number of issues from IBS and IBD to ADHD and RBGH. (I made that last one up. Well, not totally...it's a thing. That's the growth hormone they give cows to make them produce more milk. But gluten may make those cows more gross... I don't know.) Popular celebrities touted the GF diet for helping them lose weight or getting rid of ____ annoying issue they were having. I know that for ME... going off gluten DID solve some big health problems, but those problems were a symptom of my gluten intolerance. I didn't do this to lose weight. It IS possible to go gluten-free and gain a butt-load of weight. (see what I did there?)

However, suddenly in the past few weeks there's been this rising discontent with those who have decided to "go gluten-free". I feel ya. There's a BUNCH of uneducated sheeple out there who have jumped all onto this GF train without knowing even what gluten IS and what it is NOT.
There are diners in restaurants all over the country (world?) who are ordering the gluten-free pasta with a mouth full of rosemary focaccia. They brag about being gluten-free "95% of the time... except sometimes I cheat a little!" Therein lies the problem. I can't just decide to "cheat a little". True gluten-intolerance or celiac disease is ONLY controlled through strict adherence to an absolutely 100% gluten-free diet. This means NO, if you have "a gluten allergy" you absolutely can NOT have just the tiniest piece of the "world's best triple cocoa chocolate chip mega ultra fabulousness cake" someone brought in to work. Not even a LITTLE! AND YOU WOULDN'T WANT TO! You'd know that the "tiny taste" leads to near-death on the toilet.

This gluten hypocrisy is the problem.

Here's what we (speaking for the majority of the truly intolerant/allergic GF community here) need for you part-time GF dieters to do:

Say "I try to limit the amount of gluten that I consume."


See what just happened there? You've maintained your cool status by being on the latest trend, while admitting that you aren't going to be sick in bed for any number of days or spend your evening hugging the toilet if someone slips you the wrong bottle of soy sauce for your California roll.

Because when you go out to eat and you blab on and on about your gluten-free dietary needs, and how you need a special menu and how you want to be sure the chef understands that your meal needs to be totally gluten-free... but then you nibble on the bread or grab a crouton off your neighbor's salad... you are unintentionally training the servers, kitchen staff, management and other diners near by to discredit TRUE gluten intolerance as a "thing". (See previous blog I wrote about THIS tool who calls himself a chef, yet bragged on facebook about purposely serving wheat-based pasta to patrons requesting GF.)

Why am I back on my blog after a 4 month absence to talk about gluten?
Because I'm tired of feeling like a bandwaggon hopper for whispering "can you be sure this is gluten-free? No like REALLY. I have an actual allergy, not a skinny jeans problem."
I got sick today due to (probable) cross-contamination. That's when I order something safe (from the allergen menu on the nutritional information page from the company's own website) and somehow it comes into contact with something glutenny in the kitchen, gets sprinkled with the wrong seasoning, or SOMEthing... and I wind up wishing I had an in-home stomach pump machine. As I lay here in bed sweating with a horribly sick stomach, I read blog posts like this one and I really wish I could talk to this server in person. I shouldn't have to prove my level of gluten sensitivity in order to be taken seriously by the restaurant staff.

I am a mom of 12. My husband works in the food and beverage industry (read: gone alllllll the time). I guess you could say I don't get out much, and so when I do... I feel like I should be allowed the decency of your respect for my dietary restrictions. Does it kill you to leave off the croutons? Am I wasting your precious time if I ask what is in the marinade or if the fish is dredged in flour? You see, angry server/blogger, WE - the patrons of the restaurants - we make your job possible. No customers = no need for servers. I don't correct you when you tell me that "yes, it's wild salmon. It's wild Atlantic salmon.", because sweetpea... there isn't such a thing. All Atlantic salmon is farmed. So, please remember that even though a lot of patrons are simply testing the waters of the gluten-free abyss, there are others of us who are well-versed and know our way around a menu, we just need a little cooperation on your part.

Ramblings by Chrissy at 8:32 PM

Who you callin' MEGA?? 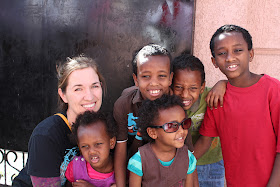 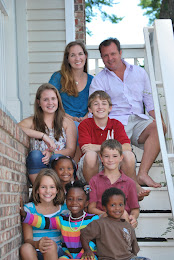 More information about us:

Blog award from my sister, Melissa

Liebster in German means dearest, beloved, or favorite, and it is for bloggers with under 200 followers.

The Holt Care Center in Addis

This is where our kids spent 5 months of their lives being cared for by the wonderful Holt Nannies.